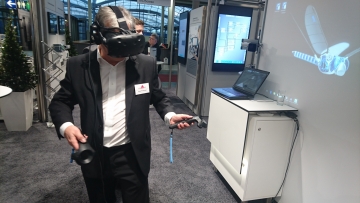 The EDS WWTP VR simulator blurs the line between the virtual world and the real world: its virtual reality technology sends the user to a three-dimensional world, simulating both the distributed control system and the primary components of a wastewater treatment plant. The mobile version of the simulator also makes it portable and flexible.

The WWTP (Wastewater Treatment Plant) VR simulator can be used to train new plant workers and test experienced ones. Similar to a flight simulator, the program provides training on what to do in extreme situations that cannot be tested on a real system but that must be resolved in an emergency. These situations include power failures, disasters and other incidents requiring qualified personnel to act quickly, safely and correctly to avoid further damage.

Adiro supports Festo Didactic in the creation and marketing of the VR simulator.